Abandoned!: The Story of Peter Francisco, Hero of the Revolution Jan Fleet Umhau 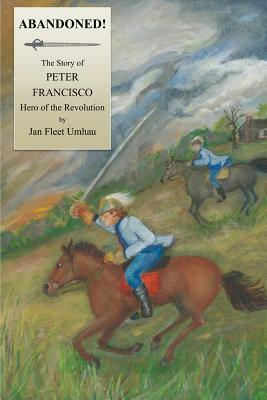 Yet today, few Americans have heard of this remarkable soldier. A finely dressed little boy named Peter who spoke no English was abandoned on a Virginia wharf, where the Appomattox and the James rivers meet, near a town now called Hopewell. Where had he come from? Why was he abandoned? Peter Franciscos is a model American story. Cast ashore with nothing, literally, but the clothes upon his back he learned a trade as a blacksmith, found a calling in the army and managed to acquire an education. By sixteen, Peter had grown to be six and a half feet tall, a foot taller than the average man of his day.

More remarkable than his height was his great strength. He was known as an American Hercules, the Virginia Giant, and a One-Man Army. At Valley Forge, Peter served with George Washington, who commissioned a huge sword to be made just for him. Peters exploits were of such renown that a print of an engraving, One Against Nine, illustrating his 1781 action against Tarletons Raiders, was hung in a place of honor in many parlors after the Revolution.

He married well and went on to live a long and successful life, which included six fine children. When Peter Francisco died in 1831, he was given a State funeral with full military honors. The officiating minister took note of Peters strength ...Superior to that of any man in [his] time...exerted in defense of the country which [he called home.] Peter never remembered where he had come from, but 200 years after he was born, in 1960 his birth certificate was found in the Portuguese Azores. Written for middle-schoolers and others, this story is a work of fiction based on facts that will give an overview of the American War for Independence told through the exciting exploits of Peter Francisco.

Comments
Comments for "Abandoned!: The Story of Peter Francisco, Hero of the Revolution":